Hepatotoxicity (from hepatic toxicity) implies chemical-driven liver damage.  The liver plays a central role in transforming and clearing chemicals and is susceptible to the toxicity from these agents.  Many pharmaceutical medications can have harmful affects to your liver.  Cissus may be a great alternative to counter acting these affects.

Conclusion:
It is concluded from the above observations that the methanol extract of CQ has a hepatoprotective activity against rifampicin-induced liver injury. The mechanism of hepatoprotection may be attributed to its antioxidant activity; this in turn is related to the presence of β–carotene. 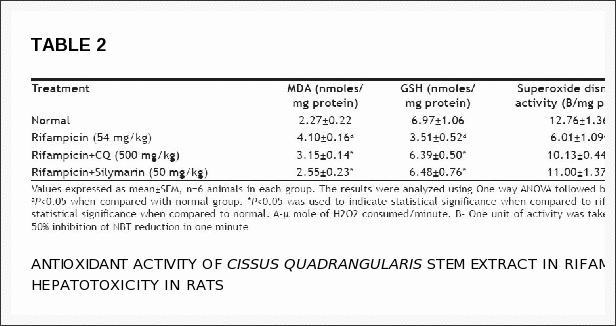 Note: Most studies done on Cissus, unfortunately used rats as a control where the rats are either put under stress, intoxicated, or sacrificed. The Cissus Experts do not support the harming of animals, but the studies done in India on Cissus have scientifically proven positive effects of cissus quadrangularis on humans and may be used to help humans prevent or fight diseases and injuries.